In a December 12, 2013, New York Times opinion piece about the honor the U.S. Government has been paying to Nelson Mandela’s life Nicholas Kristof tells us that “there is a whiff of hypocrisy about the adulation for Mandela even as we simultaneously sell weapons to repressive regimes around the world.”

Kristof points out that just as President Reagan backed the repressive regime that kept Mandela in prison for 26 years, President Obama backs repressive regimes throughout the Middle East and Africa:
“The Obama administration didn’t even blush when, on the day Mandela died, Defense Secretary Chuck Hagel visited Bahrain – an undemocratic minority regime that violently oppresses its majority.”


The island nation of Bahrain, of course, is home to the U.S. Navy in the Persian Gulf.  Its Sunni rulers used the U.S. weapons and training it receives for providing that naval base to shoot down and arrest pro-democracy protestors in 2011.  To make sure that dictatorial order was restored, the Sunni regime on the mainland, Saudi Arabia, drove its U.S. tanks across the 26-mile reinforced causeway to Bahrain. 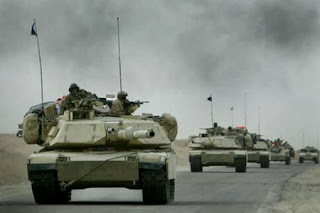 
AEMP director Caleb Rossiter met and worked with Nelson Mandela in 1991, when the recently-released leader was the keynote speaker at a prize ceremony of a Houston human rights group, the Rothko Chapel.  The Rothko Chapel was giving cash awards to brave human rights activists who were standing up against brutal, U.S.-backed regimes in Latin America.  When Rossiter, who was working for th Rothko Chapel, told Mandela that he had been part of the the anti-apartheid movement in America, Mandela replied: “Oh, those wonderful young college students with their mock shanty towns --  Without them, I would still be in prison!”

Mandela was referring to the recreation on college campuses of apartheid-era shacks that most black South Africans lived in.  Students would occupy these shacks as they asked their college administrations to "divest" the college of the stocks of any corporation doing business with South Africa.  As Kristof points out in his article, there are plenty of Mandela-like political prisoners in the prisons of U.S.-backed regimes today.  “Those wonderful young college students” -- and all anti-imperialist activists, of all ages -- still have a lot of work to do.

You can read the full article here:
Posted by Caleb S Rossiter at 1:47 PM